Argentina: Drought cuts between 25% to 30% of soybean yields 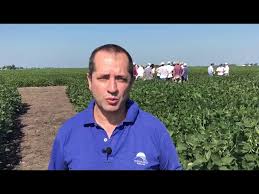 In dialogue with Javier Preciado Patiño, (Radio Con Vos 89.9), the South Cone Manager of Don Mario Semillas, Obdulio San Martin, said he expects a reduction in the soybean yields, due to drought, around 25 or 30 per cent.

Based at Chacabuco (Buenos Aires province) in middles ’80, Asociados Don Mario is the country leading company on soybean breeding. Mr. San Martin knows the Pampas as his palm of the hand. “But this drought is less severe that it occurred in the 2008/09 season”, he opines. “The heavy rains during last winter left the soils with good provision of ground water in the Southeast of Cordoba Province and Northwest of Buenos Aires province. This, and some weak rains during February, explains how some farmers are harvesting 5.000 kg per hectare, but they are the exception”, said San Martin.

Based at the heart of the Pampas (Zona Núcleo), in Pergamino, agronomist Cesar Belloso explains that considering a production of 70 kg of beans per pod, estimated yields will be below 3.150 kg per hectare this season.

If it’s confirm a soybean harvest of 47 million tons as USDA predicts, Argentina will be producing this year the same amount that in the 2007/08 season. Meanwhile the world increased its production from 221 to 341 million tons. Brazil, for example, now produce 113 MMT while ten years before harvested 61 million tones. The US’s farmers planted the same acreage of soybean than corn. As the world harvest grow, Argentina lose it’s global share.

“Brazil not only increases its soybean acreage, but also the yields. The fact is that Brazil are investing in develop germoplasm three times more than Argentina, meanwhile the US are investing five times more”, said Mr. San Martin.